Recently I took a closer look at the title pages of Tischendorf’s seventh and eighth major Greek New Testament edition. As often, the small differences are the most interesting. To name just one: in 1859, Tischendorf edited the text afresh “ad antiquos testes”, “according to old witnesses”; in 1869, the witnesses have become “antiquissimos”, ”the oldest” or ”very old”. 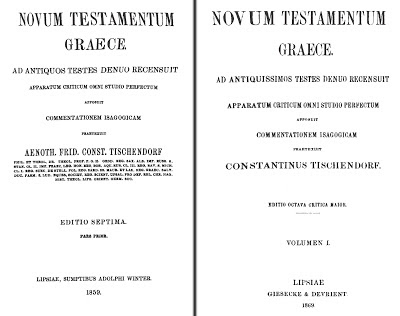 While it is not difficult to guess what prompted the change, it is nice to observe its traces even on the respective title pages. 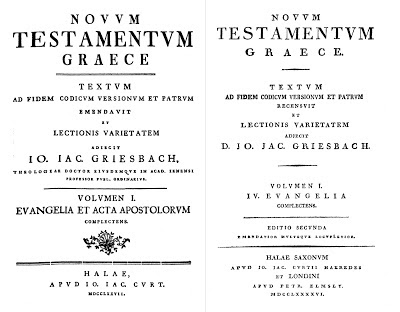 Griesbach’s first and second editions of 1777 and 1796, respectively (the dates are for the first volume only).
The change that caught my eye was between “emendavit” in 1777 and “recensuit” in 1796. Would it be too far-fetched to see the latter as an indication of things to come in the 19th century?
In any case, it is the term used by Tischendorf as well.

There is also a nice parallel in another change: it would seem that the less a scholar's name is established, the more important it is to include any marks of distinction that may apply ...

Posted by Jan Krans-Plaisier at 4:18 pm