The canon of Dutch history

Or the Dutch canon of history, of course. Anyway, there is large effort going on to educate the Dutch people and give them (back?) a feeling for their own history. An idea of what this means can be seen at www.entoen.nu.

I also found a nice cartoon for textual critics there. Fokke and Sukke, quite famous in the Netherlands, comment on the invention of printing (around 1450).

Fokke & Sukke have been doing it for forty years already: "Printing ... is not here to stay!" "People will always want to read hand-written books!"

The cartoon can also be found in a nice booklet, De historische canon van Fokke en Sukke (2007).
Posted by Jan Krans-Plaisier at 10:33 am 1 comment:

Yesterday (March 21st, 2007) we (Arie Zwiep and I) attended a delightful lecture at the Utrecht University, given by David Trobisch. The initiative was taken by Annette Merz, who has just become professor of New Testament at the same University.

The subject of the lecture was Codex Boreelianus, one of the few manuscripts of the New Testament that can be found in the Netherlands. Its siglum as a New Testament manuscript is F (09). This ‘F’ was already given by Wettstein in the first half of the eighteenth century, though the manuscript was lost at that time, and only known to him in the form of a collation. It was found again in 1830 by the Utrecht professor Jodocus Heringa, and has been in Utrecht since then. Using Wettstein’s edition, Heringa could easily identify the manuscript as the Boreelianus; he could find an especially clear sign in the words Χριστῷ τελείω χάρις (cf. ‘pfff’) at the end of Luke’s gospel. These words were cited by Wettstein and are indeed found in the manuscript.

Scrivener (in his Plain Introduction) states that ‘Tischendorf had looked through it in 1841’, but in Utrecht rumour has it that he was actually denied access to the manuscript, not so much because of what he had done with Codex Ephraemi rescriptus, but simply because he arrived in Utrecht at the wrong time of the year, in summer. Gregory writes that Tischendorf could not work on the manuscript because Heringa was preparing his collation, but this is a mistake. Tischendorf did admire (and use) Heringa’s work on the manuscript, though.

The codex is named after Johannes Boreel (1577-1629). In the 1840s there was an effort in Holland to rename the manuscript after its present location (as in ‘Codex Bezae Cantabrigiensis’), but the new name ‘Codex Rheno-Traiectinus’ did not hold. In the literature Boreel is above all named as the Dutch ambassador to James I, but his office as Pensionary of Middelburg and later the whole of Zeeland may be more important. Moreover, an ambassador (or ‘Envoy’) then was not the same as today. In Dutch sources, it is mentioned that Boreel was sent on diplomatic missions to England (three times), and that he was knighted by the King. Sir John Boreel, then, presents us with one of those sad cases of talented youngsters who opt for a political career and are thus lost for real scholarship.

The manuscript is not very important for its text, but it is a relatively early representative of the Byzantine text of the Gospels, and, more importantly, it is a very late uncial manuscript. It was probably used for worship, as the Ammonian section numbers are there (but the Eusebian canon numbers are not found in the margins), and the beginnings and endings of lections are often indicated in a special way. 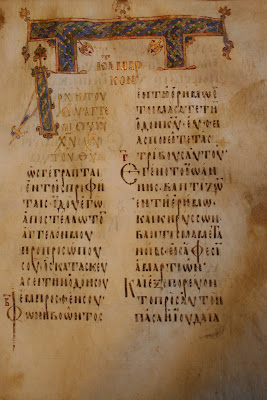 The image (courtesy of the Universiteitsbibliotheek Utrecht) shows the beginning of Mark. As usual, one chooses the most remarkable or beautiful pages for an image. Only the starting pages of the gospels have these kinds of decoration, and from the four candidates, the one of Matthew is missing, the one of Luke is interesting but mutilated, and the one of John is rather faded.

Prof. Trobisch made us take a good look at some of the pages and asked for our observations, which he then took as the starting point for a more general lecture on NT textual criticism. After the lecture, we were taken to the reading room in the Library itself, where we could see the manuscript itself in all its splendour and with all the traces of its life in church, private hands and the university library. The manuscript is not bound, many pages are missing, and at some locations it has been mutilated. Scrivener even writes that ‘few manuscripts have fallen into such unworthy hands’. This may be true for part of its history, but the manuscript is now in able hands, and the Utrecht staff is even thinking about a digital edition. Perhaps there will be an occasion at the next SBL meeting for a presentation on the manuscript.

Over at ETC, Christian Askeland draws attention to TC reprints from Scholarly Reprints. It may be worthwhile to point out that several titles mentioned by him are already available online as part of Microsoft’s Live Books Search. It is (still?) a bit tricky to find these titles there, for the search engine only allows a query on keywords. Using quotation marks around several words is very useful.

The following list is not comprehensive, but gives a good idea of what can be found (NB.: pdf downloads can be rather large):

Posted by Jan Krans-Plaisier at 1:26 pm No comments: