The scribal blunder in the Codex Corsendoncensis (min. 3)

As I was given access to the expert mode of the INTF Virtual Manuscript Room (thanks Martin), I decided to finally see for myself what the famous scribal blunder in min. 3 (VMR no. 30003) looks like. The example was discussed briefly last year on the Evangelical Textual Criticism blog.

Minuscule 3 (Vienna, Österreichische Nationalbibliothek, Suppl. gr. 52) contains the entire Greek New Testament except Revelation. It is named Codex Corsendoncensis , because it was one of two manuscripts from Corsendonk used by Erasmus when he was working on the second edition of his New Testament (published in 1519). Its date is given as twelfth-century. [The other Corsendonk manuscript is a Latin Gospel manuscript, now in the Berlin Staatsbibliothek (Ms. theol. lat. qu. 4)].

The manuscript has not yet been indexed for the VMR (any volunteers?), so it took me some time to find the correct page. It turns out to be f. 376v; the VMR number is 8110.

With the kind permission of the VMR team, I can now show the image on this blog (taken from the VMR jpg, which represents the INTF microfilm; slightly enhanced for b/w contrast; f. 376v; VMR no. 8110). As can be seen, someone marked the blunder in the text and even put a mark in the left margin to draw attention to it.

The reception history of the scribal blunder itself is interesting as well. It was mentioned for the first time by none other than Erasmus. In his 1519 edition, he added a long note to his annotation on these verses. The example must have been very welcome to him, for it is clear proof that even the sacred texts are not free from ridiculous scribal errors and that textual criticism is necessary, whatever theologians may say. He concluded the note by saying that ‘we found innumerable places corrupted for this same cause'. Even before the 1519 edition, he had already mentioned the case in his apology against Faber Stapulensis. There, the point made was somewhat more specific. He warned his colleague to not naively trust (Greek) manuscripts. Keep thinking critically.

I would not be surprised if Erasmus were the one responsible for the underlining and marginal note in the manuscript. However the microfilm image cannot be conclusive in this respect. What we do know is that Erasmus did not hesitate to put a personal note in the manuscript he used. In this case, he did so even twice, once in Latin, on f. 1r (VMR no. 80), and once in Greek, on f. 181v (VMR no. 3970). Let me show you an enhanced image of the latter: 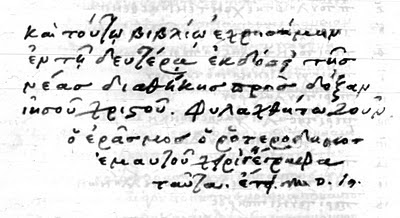 Well, at least he wanted the manuscript to be kept safe ...

In subsequent centuries, the blunder was frequently mentioned in text-critical books. Bengel, in his 1734 Greek New Testament, refers to Erasmus. Metzger also mentions the case in his Text of the New Testament (3-1992, p. 194; see also Metzger/Ehrman 4-2005, pp. 258-259), referring to Bengel. Perhaps in a future edition, Erasmus himself could be mentioned as well.

The example itself may indeed have some importance for text-critical reasoning in general and conjectural emendation in particular. It shows that marginal annotations which were mistakenly adopted into the text did occur. The question remains, however, how widespread the phenomenon actually is, and how it can be demonstrated in cases that are less clear than the one in min. 3.
Posted by Jan Krans-Plaisier at 11:28 pm 5 comments: