The Basel and Leiden editions of Erasmus' Opera omnia online

The Erasmus Center for Early Modern Studies, an initiative of the Erasmus University Rotterdam and Rotterdam City Library, has an impressive website, which is gradually expanding. An important element is ‘Erasmus online’ (EOL) a full database of the Erasmus collection in Rotterdam. 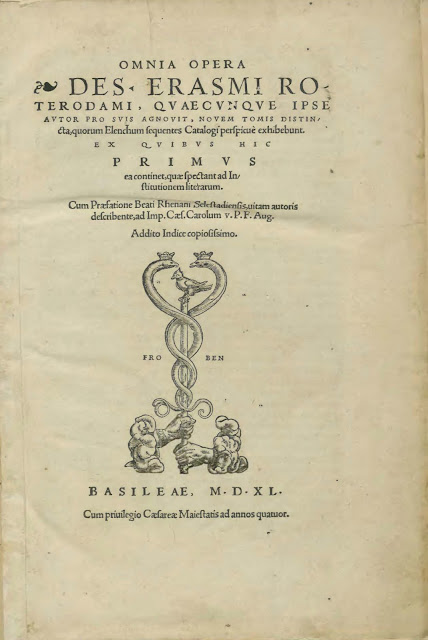 I recently found out that the complete Basel edition of Erasmus’ works (edited by Beatus Rhenanus; published in 1540; some 9500 pages!), as well as the Leiden edition (LB; edited by Clericus; published 1703-1706; more than 6000 large pages!), are available (in DjVU format). 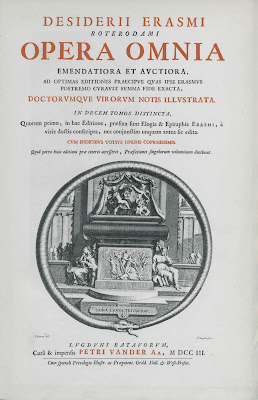 Of course, for those volumes that are available, scholarly work has to be done on the basis of the Amsterdam edition (ASD) and the Toronto Collected Works of Erasmus (CWE). Still, these resources are very welcome, and, as far as I can see, very well done.
Finally, a tip for querying the database: select an author (e.g. Erasmus) by using the index and choose facsimiles only. And perhaps it is not a very good idea to try downloading these massive works ...
Posted by Jan Krans-Plaisier at 12:00 am 2 comments:

Today, in the Utrecht University Library, a special book was presented: Bijzonder onderzoek. Een ontdekkingsreis door de Bijzondere Collecties van de Universiteitsbibliotheek Utrecht (‘Special Research [or: Extraordinary Exploration(s)]. A Voyage of Discovery through the Special Collections of the Utrecht University Library’). Celebrating its 425 years (even though the University itself is more recent), 36 authors write about their favorite objects in the Library’s special collections. 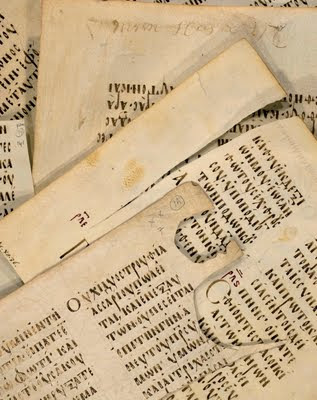 An impression of the special treatment inflicted on the Codex Boreelianus

To readers of this blog it will probably not come as a surprise that I was asked to write the story of Codex Boreelianus. Even the very few who do not read Dutch will appreciate the beautiful images made by the photographers (not only in this article, but throughout the volume).
Perhaps not everybody is willing to invest the bagatel of 30 euros in such a book; in that case, the chapters can be found as PDF files on a special website. The PDF with the chapter on Boreelianus can be downloaded directly.
One day perhaps, an English version of the book will be published as well.
Posted by Jan Krans-Plaisier at 11:26 pm 1 comment:

A book on gospel lectionary 351

Those who think that only large uncial NT manuscripts such as the Sinaiticus or Codex Bezae deserve the honour of having an entire book (or even more) devoted to them may be surprised to learn that text-critically perhaps less important minuscule lectionaries, not even mentioned in Nestle-Aland27 can become just as happy, if the circumstances are right.
John Lowden, The Jaharis Gospel Lectionary. The Story of a Byzantine Book, New Haven etc., Yale University Press etc., 2009.

It took me some close reading (i.e. note 9 on p. 121) to find out that this "Jaharis Gospel Lectionary" is l 351 in the Gregory-Aland numbering. In the Kurzgefasste Liste, the manuscript is still located in Paris, at the Société de l’Histoire du Protestantisme Français, shelf mark Ms. 206. That should thus become The Metropolitan Museum of Art, New York, accession number 2007.286 (which BTW one looks for in vain in the book).
The manuscript is now named after Mary and Michael Jaharis, thanks to whom the New York Metropolitan Museum of Art could acquire it (see also the museum's webpage on the ms.).
The book itself, written by a professor of the Courtauld Institute of Art in London, is an interesting read, and in a way a good introduction on these Byzantine lectionaries as well (see also Appendix 1 on the Menologion Rubrics etc.). There are many (beautiful) images, of course, also of other manuscripts, for instance New York Pierpont Morgan Library Ms. 639 (l 381 for NT textual critics) (figs. 58; 89-90 in the book) and Sinai, St. Catherine's Monastery Gr. 204 (l 300) (figs. 21-22).
Posted by Jan Krans-Plaisier at 3:22 pm 1 comment: