These days, I am working very hard on collecting all the data for a critical edition of Beza’s Latin New Testament. This involves analysing the five major editions (1556 (Latin only); 1565; 1582; 1589; 1598 (Latin-Greek diglots)) published during his lifetime, and also the corrected Cambridge 1642 edition. 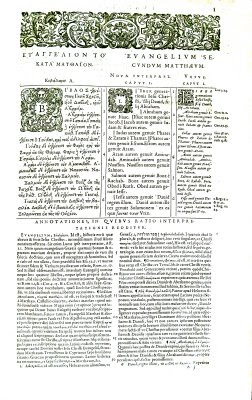 Here at the left p. 1 of the first part (f. A ir) of the 1589 edition, containing Mt 1:1-6.
Beza called his own translation the "nova interpretatio", the Vulgate of course being the "vetus" one. His "New Version", however, was revised over the decades, though rather unevenly, I must say. Anyhow, it is fascinating to see the changes in Beza's latinity, and his translation choices, at times switching back and forth between the Vulgate and Erasmus. Exegetically remarkable choices can be seen as well, and text-critically the work is important for the history of the Textus Receptus, for close reading of the Latin text shows quite a few instances in which Beza adopted a Greek reading that however was not printed in the Greek column of his diglot.
Stay posted if you want to know how this work will eventually become available to the scholarly community... 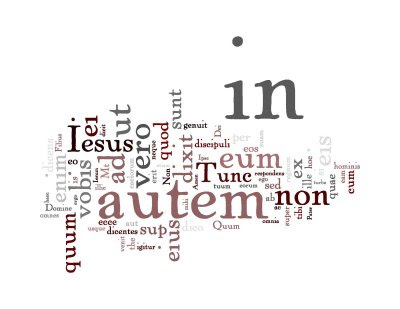 The "word cloud" you see here is created with Wordle. Give it a try.
Posted by Jan Krans-Plaisier at 10:25 am 2 comments: