This year’s December edition of Schrift, which has just been released, is entirely devoted to the Gospel of Mark. The one article they offer as a free download, entitled “Hoe ‘Want ze waren bang’ het slot van Markus werd” (“How ‘For they were afraid’ became Mark’s ending”), is about the history of textcritical scholarship on Mark’s ending.

When I agreed to write about Mark’s ending, the first thing I wanted to know, if only for myself, was when scholars started to doubt the authenticity of the last twelve verses. In Kelhoffer’s Miracle and Mission (2000) I found an extensive overview of the history of scholarship on Mark’s ‘Longer Ending’. According to Kelhoffer, critical reflection on the Longer Ending in the age of the printed book started with Birch’s publication of Vaticanus readings at the end of the 18th century. Out of curiosity, however, I moved back into history, from Birch to Wettstein (1751) … Bengel (1734) … Mill (1707) … Simon (1689) … Erasmus (1516)… All these scholars appear to already discuss the problem of Mark’s ending!

Through the ages, New Testament textual critics became increasingly aware of the problem. They encountered several remarks by Church Fathers, as well as all kinds of ‘paratextual’ information in the many New Testament manuscripts they studied. However, none of these manuscripts, no matter how old they seemed to be (such as A, C and D, all dated to the 5th century today), actually had Mark ending at 16:8. Therefore, before the end of the 18th century, no scholar, to my knowledge, ventured to hold Mark’s description of the risen Christ’s appearances to be secondary.

Then came, as mentioned, Andreas Birch, the Danish theologian-philologian, who, from 1781 to 1783, collated dozens of Greek New Testament manuscripts in continental European libraries, mainly those in Italy. Tregelles says about Birch that he “probably did more than any other scholar in the collation of MSS. of the Greek Testament” (Account of the Printed Text, 1854, p. 88). One of the manuscripts Birch examined in the Vatican library was already famous for its presumed age (some held it to belong to the 4th century; this dating is commonly accepted today). Some of its peculiar readings had already been circulating among scholars from Erasmus onwards; Wettstein can refer frequently to the manuscript he labelled ‘B’ because of its age. The most remarkable variant of ‘Codex Vaticanus’, however, had remained hidden from the scholarly community. Birch must have had his finest hour when discovering that in this manuscript, today generally considered to be our best one, Mark ends with ἐφοβοῦντο γάρ—“for they were afraid” (16:8).

Well then, the article is about this story, the accumulation of evidence from Erasmus to Birch, additional evidence after Birch, and the paradigm shift in textcritical theory around 1800 that makes the evidence of a manuscript like Vaticanus so weighty.

A final note. When I handed in the final draft of my article last summer, there was one thing I unfortunately had not been able to check: Birch’s presentation of the Vaticanus evidence in his 1788 Quatuor Evangelia Graece. No Dutch library had this book, and, more importantly, it was not yet available digitally on the internet. Archive.org did offer the 1801 revision under the title Variae Lectiones ad Textum IV Evangeliorum. Here I did find Birch discussing the absence of Mark 16:9-20 in Vaticanus as the most telling example of the quality of this manuscript. But I wanted to hear him say such a thing in the 1788 edition, looking at the actual pages that can be seen as the turning point in the history of scholarship on Mark’s ending. I spoke about this with my fellow PhD candidate Christian Holmgaerd, who is Danish. A few weeks ago, he came with a big surprise: at his request the Royal Library in Kopenhagen digitized Birch’s 1788 Quatuor Evangelia Graece, in beautiful sharp images, and put it online. This is the title page: 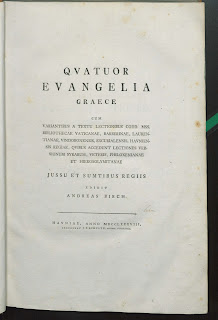 On p. xxi Birch shares his exciting find with the world:

“Now although I believe the things I have put forward above make clear how much value should be assigned to Codex Vaticanus; still, let me provide, out of many observations, one example through which this becomes very clear.
The final pericope of the Gospel of Mark, from 16:9 down to the end of the chapter, is entirely absent in our manuscript, so that below the words ἐφοβοῦντο γάρ the subscription κατὰ μάρκον is placed. …”

Thanks to Christian and Det Kongelige Bibliotek!
Posted by Bart Kamphuis at 2:20 pm 14 comments: