Last Friday (February 15th, 2013), our Professor of New Testament Studies, Martin de Boer, retired from his academic duties. We, as his colleagues, took up the good academic tradition of offering him a Festschrift. And in just as good an academic tradition, he was indeed surprised and honoured when Bert Jan Lietaert Peerbolte, his successor, presented the book: 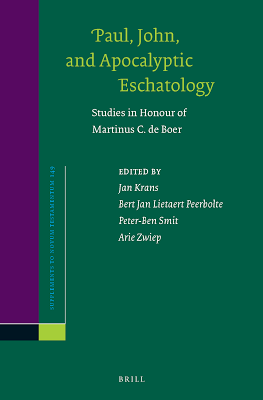 We managed, as the title shows, a certain degree of thematic unity, which is a Good Thing, not only according to the publisher. The book contains <blurb>important contributions by leading New Testament scholars</blurb>, which were at least for us as editors a pleasure to read and see through publication.

My own small article, which closes the book, is admittedly rather loosely connected to the theme, as it deals with the Pauline commentator "Ambrosiaster", and then only with the question who coined the name "Ambrosiaster". (If you think you already knew the answer, you will have to read the article.)

The book can be previewed at Google Books. It is available from Brill, both in electronic and old-fashioned format; the latter, fittingly, is not yet listed in the series Supplements to Novum Testamentum. But it exists, for <eyewitness testimony>it was offered to Martin de Boer last Friday</eyewitness testimony>. Ad multos annos!
Posted by Jan Krans-Plaisier at 3:24 pm No comments:

Jesus Traditions and the Construction of Masculinities in World Christianity

"Jesus traditions" have an afterlife as well. This also applies to the use of Jesus tradition in the construction of (ideal) masculinities around the globe. With Dr. Adriaan van Klinken (Leeds University), Dr. Peter-Ben Smit co-edited a special volume of the journal Exchange dedicated to this subject. Its contents can be found here: http://booksandjournals.brillonline.com/content/1572543x/42/1
Posted by Unknown at 8:24 am No comments: