Theology Interviews of VU University on iTunes U

The Faculty of Theology of VU University Amsterdam just posted some "Theology Interviews" on iTunes U. You can find them here. 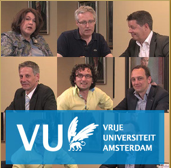 For the moment, there are three interviews of about 15 minutes each, one on "Film and Religion", one on "Justice and Peace", and finally one on (New Testament) "Textual Criticism".
Posted by Jan Krans-Plaisier at 3:13 pm No comments:

A Treasure in Teyler’s Archives!

That’s about what I shouted when I came home last Thursday. My wife looked at me full of expectation, about the way Sophia must have looked at Schliemann when he told her about Priam’s treasure. Unfortunately, I had to disappoint her. We (Bert Jan Lietaert Peerbolte, Jan Krans and Bart Kamphuis) didn’t find any gold in the archives of Teyler’s Foundation. But still, what we found we regard as a scholarly treasure.

In our investigation into the Dutch movement of New Testament conjectural criticism (1845-1906), we came to realize that the competition held by Teyler’s Theological Society in 1877 was of crucial importance for this movement. This society invited scholars to write about the history, necessity and main outcomes of New Testament conjectural criticism. Four scholars submitted a treatise. The first prize was granted to two of them, Van Manen and Van de Sande Bakhuyzen. Their works were published and gave a final impetus to conjectural criticism in Holland. But who were the other two scholars, whose work was found wanting? That’s what we wanted to know. But since the society employed (and still employs!) a strict policy of authorial anonymity, the only way we might get to know something, was to dig into the archives.
When we visited the archives last Thursday, we actually expected that the two manuscripts of the losing authors would have been destructed. But we found them both! One of the authors had send a letter to the society after he lost the competition, which was kept in the archives as well. That’s why we even know the identity of one of the scholars. And we are determined to discover the identity of the other scholar, even if it would involve the analysis of handwriting!
We found a lot more in the archives. For us it really felt like digging for treasures. Maybe that’s the beauty of historical research: once you get fascinated by a certain historical phenomenon, every historical relic connected to it becomes glittering gold and sparkling gems ...
Posted by Jan Krans-Plaisier at 2:03 pm No comments:

SBL International 2011 and the London Tube

Four members of our VU University project group on New Testament Conjectural Emendation were present in London last week; let me promise that I will blog on Silvia Castelli’s presentation and on mine. For now, however, something less serious.

One of the great pleasures of having such a project group is the frequent discussions on all matters textual and often non-textual. Thus, just after the conference, and after a nice dinner in a restaurant near Covent Garden, we were on the metro to our hotel, still discussing – don’t ask me to remember it all exactly – the importance of textual certainty and the striking differences between catholics and protestants, scholars and non-scholars alike. And how deep-felt the attachment to a specific text and tradition can be.
At that point in our lively conversation, someone sitting next to us weighed in. He elaborated on the emotional aspect and started telling how important these matters were to him. Regrettably, our group had to switch lines at South Kensington, which ended the exchange.

The punch-line none of us had seen coming was the final question of our interlocutor: “Which movie have you been to?” Right before the door closed, I managed to answer: “We are just some biblical scholars”. Mind the gap.
Posted by Jan Krans-Plaisier at 4:24 pm No comments: