This is the sixth instalment of the series on conjectures in the Nestle editions (see the sidebar).
The current Nestle-Aland edition (NA27) of the Greek New Testament mentions a conjecture by ‘J. Cramer’ on the text of Gal 1:10; according to the apparatus, Cramer proposes to read τί instead of ἄρτι. One understands immediately that the conjecture is more than just the omission of αρ-. The text as it stands is ἄρτι γὰρ ἀνθρώπους πείθω ἢ τὸν θεόν; - ‘Am I now seeking the favor of men, or of God?’ (RSV). With the conjecture, the text becomes: τί γάρ; ἀνθρώπους πείθω ἢ τὸν θεόν; - ‘What then? Am I seeking the favor of men, or of God?’
As usual in this series, the source of the conjecture comes first, then the discussion and subsequent history. 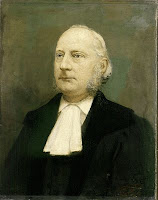 The conjecture can be found in a book by the Utrecht professor Jacob Cramer (1833-1895): De brief van Paulus aan de Galatiërs in zijn oorsponkelijken vorm hersteld, en verklaard (‘Paul’s letter to the Galatians restored in its original form, and explained’), Utrecht, Breijer, 1890. The book is actually part VI of the series or journal Nieuwe bijdragen op het gebied van godgeleerdheid en wijsbegeerte (‘New contributions on theology and philosophy’). The conjecture itself is discussed in the commentary on pp. 23-27 and can also be found in the restored text on p. 292 and the Dutch translation on p. 311.
The surprise, almost usual in conjecture studies, is that Cramer’s conjecture on this verse is actually larger than just the change from ἄρτι γάρ ... to  τί γάρ; ... Cramer uses ‘thorough-going’ conjectural criticism and rewrites the entire first halve of the verse. In his hands, ἄρτι γὰρ ἀνθρώπους πείθω ἢ τὸν θεόν; ἢ ζητῶ ἀνθρώποις ἀρέσκειν; becomes τί γάρ; εἰ ἀνθρώπους πείθω, μὴ ζητῶ ἀνθρώποις ἀρέσκειν; - ‘For what? If I try to win people [for the gospel], I do not try to please people, do I?’
I will not burden this post with Cramer’s complicated four-step reasoning in support of his conjecture. Instead, let us see how it arrived in the Nestle editions in such a ‘reduced’ form.
What we find in the Nestle apparatus is actually the part of Cramer’s conjecture accepted by Schmiedel, one of the Nestles (father and son) most important advisors. In his article on Galatians in Cheyne and Black’s Encyclopaedia Biblica, Schmiedel writes (Vol. 2 (1901), c. 1618):


In 1 10 the conjectural emendation τί γάρ, with the mark of interrogation instead of the present ἄρτι γάρ, has much to recommend it (as in Rom 3 3; in Gal. ἄρτι occurs immediately before, in 1 9); ...

In this short form, the conjecture was included in the Nestle apparatus, from N13 onwards (1927). As it stands there, its most striking aspect to me is a complete lack of context. Cramer, the author who is mentioned, wanted to apply rigorous conjectural criticism in order to maintain the Pauline authorship of Galatians against those ‘hypercritics’ who regard the letter as a bad effort of Pauline letter-writing by someone who knew Romans. Schmiedel, the one responsible for the conjecture in its current form, wanted to do the same, but without assuming, as Cramer apparently did, that Paul expresses himself clearly at all points. Therefore, Schmiedel had far less need of conjectural emendation, but applied it nevertheless. Gal 1:10 provides a nice example of Cramer and Schmiedel’s respective positions.


Remarks:
1. Cramer’s book can nowadays be found on Google Books (yet another reason to learn Dutch), just as Vol. 2 of the Encyclopaedia Biblica. However access to full-text versions may be limited outside the US.

2. As usual, more conjectures addressing the same problem can be found, e.g. by Owen, Baljon, and Naber.
Posted by Jan Krans-Plaisier at 5:00 pm