Suppose you can study the textual complexities of a New Testament verse in an attractive and easy-to-use web-interface, with access to an exhaustive critical edition, which for a start lists all manuscripts together with all readings in this verse (and, as far as I am concerned, even the scholarly conjectures in a different layer, editorial choices and whatever). And what is more, for any manuscript listed you have access to a digital image of the page with the verse you are studying, just one mouse click away. Wouldn’t this be heaven on earth for the textual scholar? Tommy Wasserman could have done his dissertation in one year or less ...

This heaven may well be realised, at least for the New Testament, in the not-too-distant future. Eschatology in the process of realisation. I cannot demonstrate how it will be (it is the future, remember), but I can tell something about a small, essential step being taken right now. It is time then to already learn a new acronym: VMR, the Virtual Manuscript Room, for that is where the manuscripts will be - for as we all know, virtual is just as real as real itself, only different.

As far as every virtual reality has a foothold in our everyday space-time continuum, this one is located in a country known as Germany, more precisely in Münster, at the INTF. The project is managed by Ulrich Schmid and Martin Faßnacht, two persons I know to exist - Ulrich even speaks Dutch.

To begin with, the VMR addresses a very important problem that hampers efficient interaction with the wealth of digital images coming available on the internet: lack of indexes. Normally one does not only want the images, but also to easily find a given passage. It is of course much more, but in its most simple form, the VMR index contains a list of pages with their internet address and contents. Thanks to that index, the VMR promises to be the ideal intermediary between any form of information that uses verse references and the web-based images themselves.

The index can (and will) contain more than just the textual contents; it also records illuminations, decorations, canon tables, kephalaia lists, etc. Some images may not show the manuscript itself, but its binding, or a scale (or the gloved fingers of a Google collaborator). This can be indicated as well. The screenshot here shows the interface I am using right now, as a beta tester, to provide the index information for the Codex Boreelianus (F 09) of the Gospels. 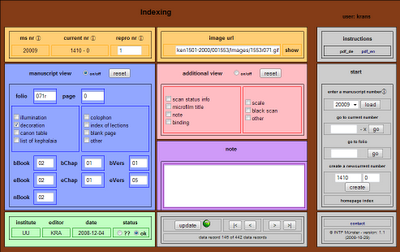 Not much eye candy here, except for the fancy colours, but the interface is effective enough.

A popup-window can be opened with the web-image of the page you are indexing. In this case I am at the beginning of Mark. As said, the indexing allows (demands) me to draw attention to the decoration (the head piece) here. 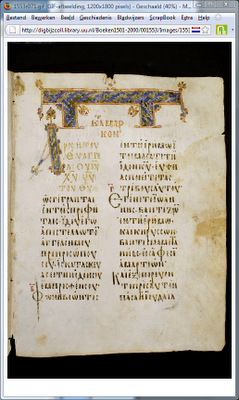 More important than the interface, of course, is the underlying database technology (MySQL), and the model adopted to describe and index the manuscripts in a unique and complete way. All this guarantees the (re)useability of the data.

Wouldn’t this indexing job be a nice pass-time for a talented undergraduate, as it is just looking up some verse references and filling in some numbers, after all? Partly yes, but mostly no. In the first place, one always underestimates how much background knowledge is taken for granted. How do you know that something is special when you hardly know what is normal? More in particular, part of the beta testing process is to find out how to handle the unexpected. One example is the indexing of pages which are incomplete. And the Boreelianus, a two-column manuscript, definitively has its share of torn and cut pages, in many different ways. The few days of working with the project allowed me once again to realise how useful beta testing can be. It is all a matter of finetuning and making explicit aims, limitations and working procedures.

Once the VMR is up and running, with the data entered by collaborators all over the world, it should become really easy to answer questions such as "how many complete manuscripts of Mark’s gospel are there?" or "which manuscripts contain Rom 1:1-7?". I am convinced that the data, all together, will give textual scholars research possibilities not thought of previously.

The VMR, in my view, would not have to be limited to manuscripts (what’s in a name?). Alongside manuscript study, the history of the printed text and of textual criticism as a scholarly discipline deserves some attention as well. So why not include important editions such as Tischendorf’s Editio Octava? By the way, the TC Ebind site, which contains images of the entire scanned edition, is down at the moment, but I hope it will be back online before long.

Are there possible problems? Of course, and certainly more than I can think of. A first difficulty has to do with the lack of stability of the internet. As the VMR database contains references to images anywhere, it will certainly require frequent maintenance. Another problem may be lack of direct access to images on the web. In many cases, for instance, images are hidden behind (inside, that is) intricate web interfaces which do not allow so-called "deep linking".

Another important issue, from a scholarly point of view, may be data suffocation. Of course we need the data, with speedy access to all we want, but we should keep in mind that wealth of information does not necessarily make us better textual critics. With everything visible at arm’s length, we are almost bound not to have a "grand view". Nothing will replace the hard and intense labour of actually working with the data, but the VMR promises to make our time even more well-spent.

Thanks to Ulrich Schmid and Martin Faßnacht for permitting me to blog on the VMR project while it is still in beta.

Some information on the VMR can be found on the projects page of the INTF website. Stay tuned there for developments. A call for collaboration was issued in December 2007 on the Evangelical Textual Criticism blog.
Posted by Jan Krans-Plaisier at 3:15 pm

JK: "Tommy Wasserman could have done his dissertation in one year or less."

That is a bit too optimistic. Of course it would have saved me four trips to Münster, where I accessed most of the manuscript data on microfilms (and various costs during these visits). On the other hand, those visits were valuable in many ways, not least the contacts with the staff, discoveries of new MSS, etc. which I think would not have happened without physical visits.

When it comes to my dissertation work, I had to do mandatory courses ca. 1,5 years, so I devoted ca. 2,5 years for research and writing. I estimate the time it took to do transcriptions, computer collations, apparatus and appendices to ca. 1,5 years. The remaining year was for the other parts of the book (prolegomena and textual commentary) and some other papers and publications.

Tommy,
My remark was made somewhat tongue-in-cheek, as you undoubtedly noticed.
Nice point you make actually: the finished VMR may have the important drawback of preventing us from travelling and making new acquaintances and new discoveries.

A first difficulty has to do with the lack of stability of the internet.

Well, this is a serious problem. I know what I am speaking of, since I have a list of the papyri on my web site.
E.g the image URLs of the POxy papyri change roughly once a year or so. It takes a lot of commitment to keep these up-to-date.
I don't want to spoil the idea, it is a very good one, but it would be much better to have all images in one place, with a stable URL.
I know ... utopic.

wieland: thanks for the comment. If I remember well, the project managers will take the sensible middle road of going along premarily with properly established institutions (such as INTF itself, or Universities as the Utrecht University), which may permit a stability of at least a few years instead of just one. But I agree: the problem is serious. Having copies at a central location may indeed be a few steps too utopic for our world.

This summer I went through and indexed the first verse of every page of toe Boreelianus. If that index would help, I'd be happy to send it to you.

Bob,
I finished the job a few days ago, but maybe your file could be useful for checking purposes.

Sorry a took so long. I originally has the list embedded in .pdfs suitable for printing out the boreelianus (I used it in an intro to manuscripts class in our Junior High/High school class).

Here they are in a digestible form. If the .pdfs (or original open doc .odt files) would be useful, I'd be happy to make those available as well.

Matthew, Mark, and Luke were assembled using the UBS GNT as a guide by myself (hunting for endings, mostly by letter rather than words). John may not have any independent value as a check. I assembled it using the INTF site, not by looking directly at the manuscript myself.